I have recently gotten into a kick of buying older Japanese toys. Lots of vinyl and diecast toys, stuff from the late 70s to fairly current releases. It came when I had a certain desire to branch out into something different than what everyone else is talking about and reviewing. It also comes from a lack of being wowed by most modern release toys. Most of the best stuff hitting shelves right now is coming from companies like Marvel Select, Mezco, NECA, DC Direct, and other “specialty retailer” companies who are putting forth a lot more effort in their releases than Hasbro, Mattel, and Playmates. I’ve come across some really awesome pieces over the last 6 months, and some of them I found at the flea market. I found this still boxed Blue SWAT figure on E row at the Oldsmar flea market only a month ago. You never know what you’ll find stashed in old flea market booths and this particular booth was full of all kinds of treasures, shame most of them I owned already. Tucked behind Marvel Famous Covers figures on a rear shelf was this boxed figure. Originally it had an outrageous price tag of near $60 on it, after talking with the owner and seeing that the figure was missing a gun and shoulder pad he dropped the price significantly. I’m not usually much for an incomplete figure that I may never find the pieces for but at the final price he was willing to give me the figure for, I’ll deal with it.

The premise of the show is a Space Mafia invades Earth while the human race is busy tearing itself apart with war and crime (some elements of pollution too because it’s the 90s!). The Japanese government establishes the Blue SWAT, a military-like world police to combat the evil Space Mafia. Things go awry when an alien infects the chief of Blue SWAT, causing him to blow up headquarters and all but three Blue SWAT members perish in the explosion . Members Show, Sig, and Sara are left alone to defend Earth from the Space Mafia with their assortment of equipment and weapons. Blue Swat was the 13th installment of the Metal Hero Series from Japan. Those not familiar with it, some of the Henshin Hero footage from the Space Sheriff series was used to make VR Troopers and Juukuo B-Fighter was used to make Beetleborgs. Watching these series in their original entirety is nothing short of amazing and sure makes what we grew up with seem very juvenile. In Japan, Blue SWAT was not well recieved by their children’s demographic due to it’s very sinister undertones but the adults loved it. Airing for 51 episodes and a full length movie, Blue SWAT still remains one of my favorite hidden gems of the Henshin genre. The Blue SWAT figure I got at the market was Show. He comes packaged wearing a blue lame’ sleeveless jump suit and snap on armor pieces. I wasn’t really too impressed until I noticed the chestplate was heavy die-cast metal and hinged instead of being made into two pieces that snap together. He doesn’t look like much in the package but fully suited up he’s got a great Daft Punk look to him. All of the larger weapons have firing mechanisms and great details like flip down shoulder rests, red “laser” lights or sights. Every crate opens up to store equipment and the smaller cases have alcoves to fit the specific weapons inside. Unfortunately, one of the cases is missing a pistol but it doesn’t really take away from the overall displaying of the figure. One of the best things about the figure nearly being complete is the instructions were tucked away inside. A great bonus for a 20 year old toy from the other side of the world.

I seem to be forever doomed to write about bendy toys, or it would seem that way as of late. I mean there’s probably in total somewhere between 3 to 7 bendy toys I wouldn’t mind owning, every other one I find outside of that I’d sooner set on fire to rid the world of it. I have an extreme love/hate for these overproduced pieces of rubber but once every so often there’s one that I gravitate towards. Sometimes it’s because a genuine action figure for the character doesn’t exist, sometimes it’s because the price is right or sometimes it’s because I’m strangely drawn to it for reasons beyond my comprehenison. This piece is roughly all 3 of those reasons rolled into one. My facination for the Leprechaun bendy started over 20 years ago. My aunt ran a collectibles shop where I’d help out by sorting new collections, cleaning toys and piecing them together. One day a collection of miscellanious figures came in with 3 of these bad boys in it. Three was the magical number because it meant I could grab one and the owner’s son could get one too since he liked horror based toys. This was a time before the internet and I had no background on where it came from or what it was worth, all I knew is I wanted it badly. Somehow, my aunt and the owner couldn’t come to an agreement over price for what he was selling and all 3 walked off; never to be seen again.

20 years later most memory of the Leprechaun figure had slipped into the murky recesses of my mind. I had once or twice looked the figure up online but never found any active or closed auctions for the piece, I found rumors about it being a promotional giveaway if you bought the VHS tape when it came out. Sounded logical since VHS tapes back in the early 90s cost a small fortune and there had to be a reason to shell out a bunch of money on a plastic brick with a movie on it. But the internet is vague and no one had much of any real information other than if you wanted the toy it was going to cost you a lot of money for no good reason whatsoever. Screw that noise, I’ll do without. Years passed and word of a NECA or McFarlane Toys Leprechaun action figure hit the web but the toy never got past prototype stages. Many more years passed before I found the Leprechaun bendy sitting in a collectibles shop in a flea market. Picked up for a quick $10, I gleefully grabbed him up knowing the figure commands $40 or more online. $10 is about right for the toy. He’s a solid and sturdy rubber figure that while his likeness isn’t the best, it’s passable that even my coworkers know who it is when they walk by my desk. No frills here except for the fact the Leprechaun stands on his own unlike his bendy brothers and sisters which is a nice touch and makes him far more displayable than other bendies I own. I can’t see why some people spend so much on this figure unless the Leprechaun franchise is their favorite series of horror movies with a dwarf as the main character.

If I had an editor, lines like that previous one would never make it to print.

He’s also holding a gold coin in his left hand, just in case you forgot the premise of any Leprechaun story in existence. 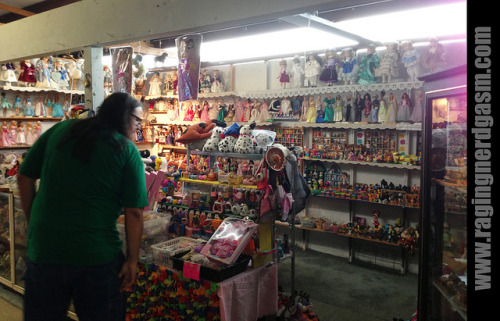